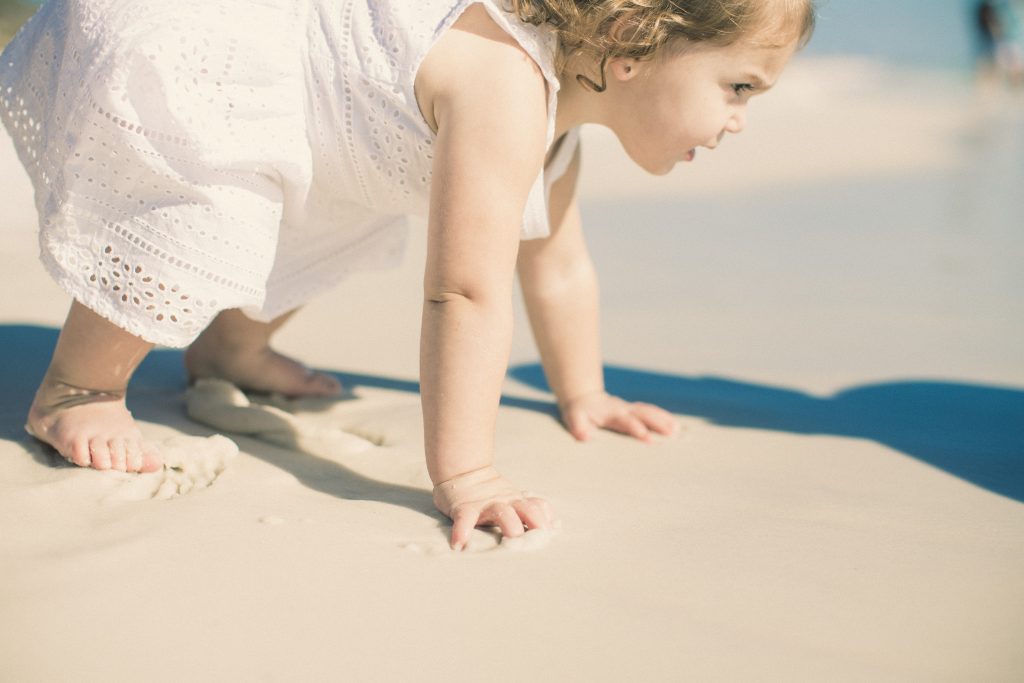 Consider the aspiring toddler determined to walk. She’s fearless when it comes to her determination to walk, no matter how many times she falls. The toddler has no fear of failure. She doesn’t stop because she falls. Without hesitation, she determinedly gets up again and again, and keeps on going, no matter what.

But once that child enters school she quickly learns that failure is a bad thing. We’re conditioned from childhood to think of failure as bad. From bad marks on assignments and tests, to being laughed at for tripping or saying something silly, the fear of failure… of failing in some way in the eyes of others, is far more prevalent in our lives than you may know.

What Will People Think

Somewhere in elementary school, we develop a fear of failure that subsequently adds layers of constriction to our innately playful, unabashed, exuberant and curious self. We begin to become self conscious and by middle school that often increases to an acute fear of rejection or concern over what other people may think.

Consider the bright eyes and eager attentive face of elementary aged children. Then fast forward to the faces and walk of the majority of high school students. From curious and interested children, to the absorbed and averted eyes of an average teenager, much of that is due to the loss of freedom of expression.

The loss of our connection to our eager learner selves is based on the fear of failure and rejection in the eyes of others. Even the defiant teen behavior often has its roots in self protection to cover up emotional wounds.

By middle school, we no longer feel free to be ourselves.
~LeAura Alderson, cofounder-iCreateDaily.com®

In high school and young adulthood, some develop atelophobia, the fear of imperfection. These concerns inhibit our innate proclivities to create and share out of the fear of failure.

But progress doesn’t happen without mistakes. So don’t worry about it. Don’t fret what others may say or think. This is your life and your aspirations. The rest doesn’t really matter.

On your death bed you won’t be lying there worrying about what people might think of you. So don’t let that fear stop you now.
~LeAura Alderson, cofounder-iCreateDaily.com®

If you’ve ever felt the grip of fear clutch your heart, kick you in the stomach, and paralyze your progress, then you know the struggle is real. But it doesn’t have to be.

While the fear is real, the cause of fear rarely is. Fear is a physiological response to an emotion or thought. More often than not, the things we fear are projections and imaginings in our minds that never come to pass.

On your road to success you must put fear in the trunk to pull out intentionally, only if you need it to protect you from real dangers. In the meantime, it’s all imagination.

If you’re not putting your imagination to work for you, it’s probably working against you.
~LeAura Alderson, cofounder-iCreateDaily.com®

You used to know how to push past failure. We all did it naturally when we were toddlers. Before we became self conscious and inhibited, we learned to walk because we were determinedly focused on doing just that. And so we did.

And… you can again now. It just takes a little practice, persistently over time. Daily does it. The more you do it, the more you can do it.

Diss the doubt. Don’t let it do you in.

Never let the Fear of Failure Stop You

When a young child learns to walk, it’s because he wants to walk; nothing will stop him from walking. The intrepid toddler has no fear of failure. He’s obsessed with walking; and so he does.

Your whole life is really just a series of you “learning to walk”. Every new goal, project, page, canvas, or composition sheet, and every project that falls short, is a lesson and another step forward toward better.

“Don’t let the fear of losing be greater than the excitement of winning.”
~Robert Kiyosaki, entrepreneur, investor, author, teacher,

We’ve likely all heard that J.K. Rowlings, author of the famed Harry Potter series, was rejected by 12 publishers before she was finally accepted by one. Today, she is one of the wealthiest women in the world with an entire Disney theme park dedicated to her brainchild. If the fear of failure had defeated Ms. Rowlings, generations would never have known the magical world of Harry Potter, not the namesake theme park visited by over 230 million people each year.

Years ago, Jack Canfield and Mark Victor Hansen were rejected 140 times and told “Anthologies don’t sell”. Can you imagine keeping on trying after the 50th rejection, let alone the 100th?!?

If they had given up, the world would never have known the popular Chicken Soup for the Soul series. That iconic brand has, has gone on to become an entire industry, selling over 500 million copies worldwide, in an wide array of “for the ____ Soul” versions.

In another story of perseverance, after 5 years of continual rejection, another writer finally landed a publishing deal: Agatha Christie. Her book sales are now in excess of $2 billion. Only William Shakespeare has sold more. If the fear of failure had stopped Ms. Christie, we would never know and be influenced by her brilliance.

And… if he’d listened to the rejection letter, the world never would’ve known about Green eggs and Ham. But because Dr. Seuss did not give up, over 300 million books have sold, earning the rank of the 9th best-selling fiction author of all time. Imagine a world with no Dr. Seuss, and what a creative loss it would’ve been if he had given in to the fear of failure.

“Successful people do what unsuccessful people are not willing to do. Don’t wish it was easier, wish you were better.”
~Jim Rohn, American entrepreneur, author and speaker

For every author story above, we can be sure there are as many comparable stories for visual artists, musicians and entrepreneurs. One of the most important life lessons that isn’t taught in schools is that failure is normal and ever precedes success.

One thing is certain:

If you quit, you won’t succeed, so… the only way to lose is to quit.

Be the “toddler” determined to get up and walk into the future of your dreams.
~LeAura Alderson, iCreateDaily.com®

If you let fear hold you back, you’re letting fear rule—and diminish—your life. Fear is the dark that blights the light. So how to let go the fear of failing? Keep getting up, adjust as needed and try again.

Tell fear “NO!”, and let it go. Reframe your mindset and fortify it each day, and that petulant voice of fear will finally give up, shut up, and move on.
~LeAura Alderson, cofounder-iCreateDaily.com®

Fear may never leave you, but it need never again impede you. Fear cannot withstand the steady pursuit of a determined soul.
~LeAura Alderson, cofounder-iCreateDaily.com®

For more quotes on fear, check out this article.

“Failing forward“ has become my mantra since I began painting . Every “fail” is still a step forward in my art journey, because I learn something of value every time. It doesn’t stop me or slow me down . It actually compels me to move forward, to do it again and do it better until I get it right.
~Mary Peters Ballesteros, artist

iCreateDaily Journals and Merchandise on Shopify

A movement for creators serious about their work.

Best Gifts for Artists
Goals for Personal and Professional Growth and Development
15+ Reasons Not to Go to College
The Guest House by Rumi and Other Ruminations
60 Mel Robbins Quotes on Setting Intentions for Success
Short Inspirational Quotes on Art, Life, and Creativity
The Gilded Cage of Life
Making Something from Nothing - Destiny and Legacy
Art & Creativity Challenges - Grow Your Creative Capacity
How to Be a Badass...

Hello! I’m LeAura, a philosopher, generalist, autodidactic, personal development advocate, entrepreneur, writer, editor, author, ideator, media publisher, and podcaster, passionate about helping others achieve their best possible life! We’re a media publishing company run by our small family of entrepreneurs, writers, and creators around topics we enjoy, such as gardening, health and fitness, creativity and pets, with more to come.

My personal areas of creativity are in writing, masterminding, ideation, synthesis and bringing ideas to life through business and entrepreneurship.

This error message is only visible to WordPress admins

Scroll back to top