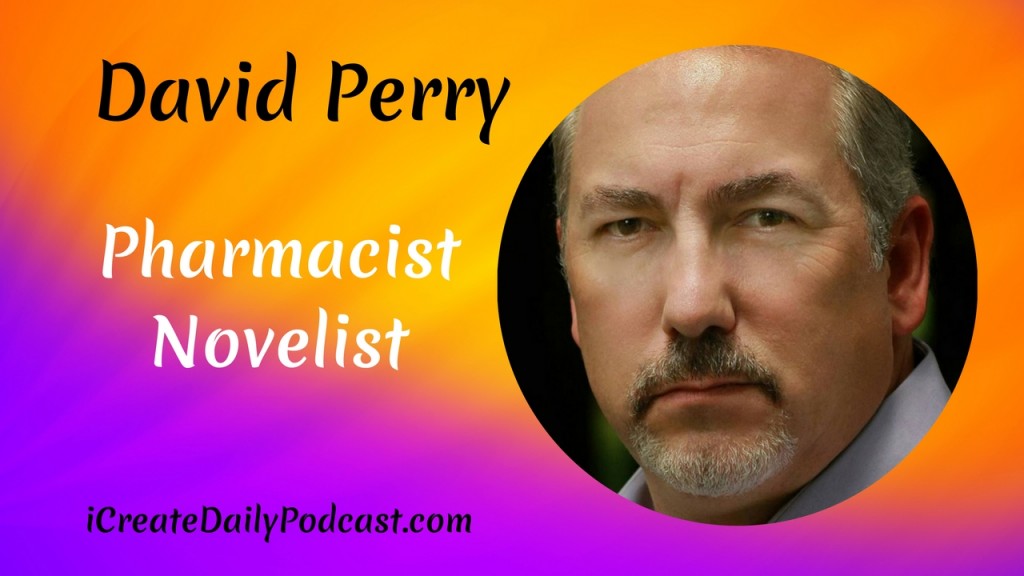 David Perry is in good company. He’s not the only pharmacist novelist to have best selling novels.

If you’ve ever read any of Agatha Christie murder mysteries, you’ll recognize how she used her chemistry training to conjure up lethal potions for her plot victims.

Author David Perry, definitely makes use of his pharmaceutical training in crafting his novels. In fact, the heroes in his novels, The Cyclops Conspiracy, David’s hero is also a pharmacist.

David’s second book in the Cyclops series releases in February, 2018… six years after The Cyclops Conspiracy. So David’s story is not only about fiction writing, but about the perseverance to do the work you love, even if it take years.

We wanted to know more about how David’s story plots develop in his medical mind, during a hard day’s work.

In this interview we cover David Perry’s:

David Perry has been a pharmacist for nearly thirty years. His first novel The Cyclops Conspiracy, reached best-seller status shortly after its release and was nominated for a Library of Virginia Literary Award.

His second book, (which is actually the first novel he started before life took over) Second Chance, was released in November 2013, and his third novel, and second in the Cyclops series, The Cyclops Revenge, releases February, 2018. David lives in Yorktown, Virginia, where he burns the midnight oil writing murder and suspense thrillers.

I promised myself that I was going to at least write one page a day.

“Anything you’re writing has to advance the plot.”

“You have to have thick skin and plow forward and don’t ever give up.”

We hope you enjoy this lively visit with David Perry!

Listen on iTunes – Listen on Stitcher

The Cyclop’s Conspiracy, by David Perry

Hello! I’m LeAura, owner and co-creator of iCreateDaily.com®.  As an autodidactic philosopher, generalist, personal development advocate, entrepreneur, writer, editor, author, ideator, media publisher, and podcaster, I’m passionate about helping others achieve their best possible life! Our small family of entrepreneurs, writers, investors, educators and creators own and run websites around topics we enjoy, such as gardening, health and fitness, creativity and pets, with more to come.

My personal areas of creativity are in writing, masterminding, ideation, synthesis and bringing ideas to life through business and entrepreneurship, all with a pervasive spiritual foundation with a focus on elevating the lives of others.