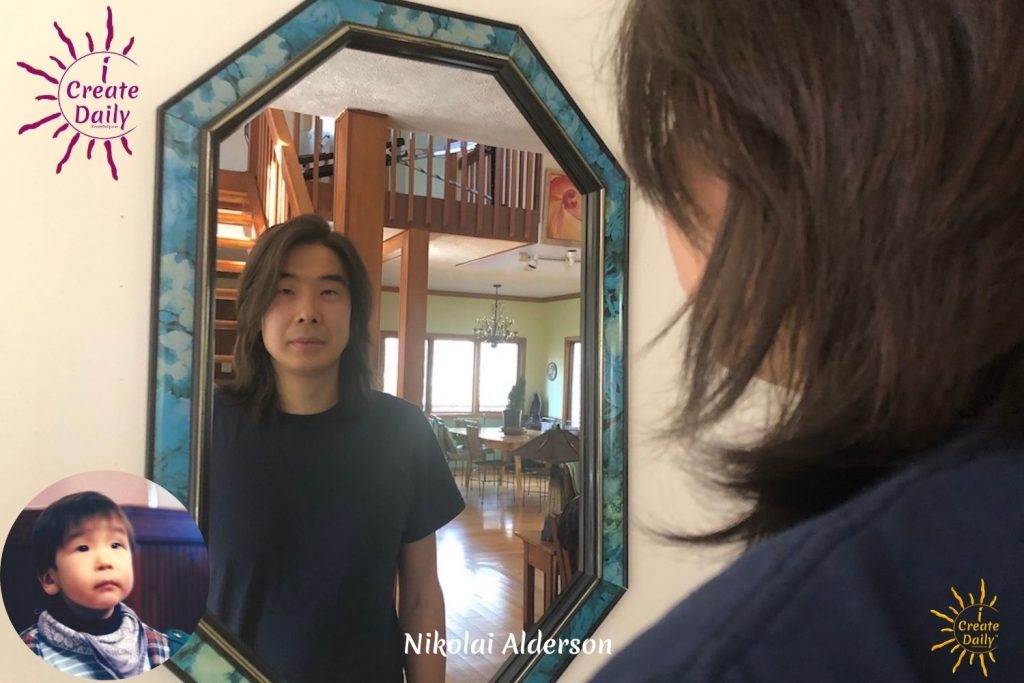 A Tribute to My Son, Nikolai Lukian Alderson

Nikolai is Koryak Native Russian, like the Russian equivalent of the Native American Indians. And he’s also an American since age two when his feet first touched American soil.

His biological tribe suffers similar struggles to the NAIs. They’re often afflicted by poverty and addictions fueled by hopelessness.

It’s a similar struggle for many native cultures, where the natural wisdom and traditions are being replaced by modernity. What’s missing is a graceful transition — a bridge — to the new while retaining the best of the old. Subsequently, many fall through the chasm between the two.

Values and traditions around the world are disrupted in these transitional times. It is a human plight, this disconnection from nature and the old ways, but one starkly evident in legacy cultures. Meanwhile, many are wrestling with ways to blend the best of the old with the best of the new… there is much work to do.

Often, for ethnic groups like the NAI’s the Koryaks and the Maori’s, it is their art… their music, medicine and dance that bridge them into a role of cultural significance. When they share their art and skills, the world benefits by the beautiful traditions to share and preserve.

RELATED: Scientist and author, Jon Turk, has written his personal account of shamanic Koryak healing in his book titled The Raven’s Gift: A Scientist, a Shaman, and Their Remarkable Journey Through the Siberian Wilderness.

The New Zealand Maoris as depicted in the movie, Whale Rider, are another good example. It’s a good movie to see if you haven’t already. Sad, hard, yet simultaneously uplifting and heartwarming.

The people of Nikolai’s heritage are reindeer herders, which means that many of them are nomadic, traveling around with the reindeer herds. Instead of fencing them on owned land like cattle, for they often don’t own the land, they follow the reindeer herds from tundra to tundra.

Those who’ve kept the old ways know how to survive on the frozen tundra. Some of them keep the way of shamans and mythological beliefs. But too often, that doesn’t translate to civilization and changing cultures, and the struggle for survival and identity is real.

Koryak – People of the Deer

This 5:35 minute video by Jon Turk, a scientist with a a Ph.D. in organic chemistry, is a summary of the life of one reindeer herder tribe and reveals the plight and fight for their existence.

As an infant, Nikolai suffered a rough surgery, then growing into toddlerhood, he suffered neglect and malnutrition, rickets and numerous serious flu viruses.

Nikolai’s birth mother placed him in a government home — a quasi hospital and children’s orphanage — when she became ill. She planned to return for him as soon as she got better. Instead, she died about 6 months later, likely due to alcoholism, a common cause of death in Russia, especially amongst the NR. She was 24… the age that Nikolai turns today.

Nikolai’s road here has had its ups and downs. We flew — literally — around the world to bring him home to his forever family at age 2. Once home with us, he went from the happiest childhood to struggling in school and finding his way… his identity, but not unlike most teens.

He’s acutely dyslexic with dysnomia, which slows him down, when his ADHD self would rather be full throttle in life. We’ve often teasingly called him espresso brain as he comes with a natural supply of adrenalin.

Today, he is a healthy six foot tall male, with a bright future ahead.  He’s most at home romping through the woods or playing with his cat, dog or drones. He laughs so hard at slapstick movies that his glee becomes as entertaining as the movie. Wildly imaginative, Nikolai enjoys writing fiction and puts his imagination to work regularly writing stories that may become future novels.

Kind and compassionate, Nikolai is aware and perceptive, imaginative and creative with a zeal and gusto for life, fun and adventure. He’s an ancient warrior in modern clothing… a wild woodsman running with the reindeer, and a protector of animals. He’s a good and proficient cook, and has recently become an investment education coach apprentice, in the program his dad works with.

Nikolai helps serve in property, yard and garden maintenance at home and in our rental cabin business. He helps in our websites, and has his own monetizing website, Labrottie.com and with others to build in the works as he steadily improves in his writing skills and media publishing knowledge.

Not crazy about gardening, but with a growing interest in plants, Nikolai has a few of his own well nurtured potted plants. When it comes to nature, he has a keen eye for identifying trees and plants, birds and insects.

Nikolai’s aspirations include starting an animal rescue ranch and combining that with programs for educating and training orphans here and in Russia (or visiting from Russia). He’s grateful to his biological birth mother for giving him the chance to survive by placing him in the government home when she did. So are we. It took courage, love and foresight — and likely a lot of distress — to turn him over to others when she did.

Like all of us, he struggles with issues to grow through. Life on earth… we’re all humans under construction… and it’s gratifying and heartwarming to see his steady progress.

When we were looking to adopt our second child and brother to Devani, we saw a photo of 18 month old Nikolai online, then connected with the adoption agency and received a video.

dHe was in a room with a few adults, and given crayons and paper to play with while they got footage of him. Though scarcely interested in the crayons and paper at the time, he was intensely tuned into the people around him. He loved interacting with people, and still does.

We were searching for an infant, but when we saw toddler Nikolai, we knew he was the one. While it’s not been all smooth sailing — is parenting ever…? — we’re so grateful he’s our son and wouldn’t change that for anything.

As the judge in Magadan, Russia asked us on our day in court to get the court’s approval to adopt him, “What if things don’t go well?”

To which I replied, “There are never any guarantees, whether it’s a biological child or one of the heart alone, and we are committed to him and his soul.”

And so it remains.

I’m so grateful to be Nikolai’s mom. Together with my husband, Coleman, we’re glad to be his parents, mentors, friends, and fellow aspirants in this journey of life. We’re eager to follow his evolving journey, while appreciating each moment along the way.

Nikolai was given his first name at birth, and we kept it at adoption, adding a Russian middle name of Lukian.

Nikolai Lukian Alderson – A Wise Warrior — Bringer of Light for the People.

We love you always and forever, Son.

If you want more on the Koryak culture…

While this Koryak hunting dance is a fancified version of the traditional it’s a beautiful depiction of the energetic vigor and resilience of this ancient culture.

If you want more, here’s another version of what it’s like growing up as a Koryak native.

This 13 minute video follows the “harvesting” of a reindeer, so be aware you may not want to see that. Still, this is a vastly more humane process than most modern cultures. The Koryak live and travel in harmony with the reindeer and are familiar to them, though living free without fences.

If you enjoy ethnic history, you may enjoy reading more about the Koryaks in this PDF of Volume VI Memoir of the American Museum of Natural History: The Koryaks – Religion and Myth from The Jessup North Pacific Expedition, by Waldemar Jochelson, 1855-1937

The Autodidactic Learner and Abundant Wisdom
15+ Reasons Not to Go to College
What Does Creativity Mean to You?
Right Brain, Left Brain - Myth or Truth?
New Year Haiku Poems to Inspire a Fresh New Start
Don't Procrastinate - Do the Work
This is the Time of Your Life
4 Simple Steps to Achieve Your Goals
90 Momentum Quotes to Keep You Moving Forward
To Toot Your Own Horn is Essential for Your Brand Survival

Hello! I’m LeAura, a philosopher, generalist, autodidactic, personal development advocate, entrepreneur, writer, editor, author, ideator, media publisher, and podcaster, passionate about helping others achieve their best possible life! We’re a media publishing company run by our small family of entrepreneurs, writers, and creators around topics we enjoy, such as gardening, health and fitness, creativity and pets, with more to come.

My personal areas of creativity are in writing, masterminding, ideation, synthesis and bringing ideas to life through business and entrepreneurship.